Each of these factors can influence the ease with which daily activities can be completed.  The tips suggested here can help you more fully and safely complete each of the described activities.

While a resting tremor is the most common Parkinson's tremor, a tremor with movement can also be present.  This action tremor can interfere with activity that requires fine motor control.  In addition, any activity in which you have to hold an object for a period of time (such as a spoon when eating) can result in a tremor developing possibly due to muscle fatigue.

If possible, try to time your medications so that they will be 'on' when you are doing activities that are meaningful to you.   Automatic actions can be impaired so it's important to limit distractions and avoid multitasking in order to focus your attention on the task you want to perform.  Some people with Parkinson's find that it is helpful to mentally visualize what steps need to be done and silently talk to themselves describing each step as it is being performed (for example, "put my hand and arm into the sleeve"). 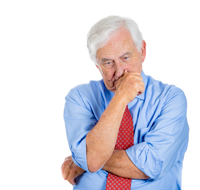